Disregard gaming mice, and you’ll find a handful of desktop mice competing for the title of best mouse. Microsoft’s Surface Precision Mouse is an excellent option but, for my money, the Logitech MX Master 2S is the mouse to buy.

Not only is it extremely sensitive, precise and comfortable, but its extra buttons and software features actually make a difference in everyday Windows, creative and office productivity tasks.

I’ve used one nearly every day for the past year and no other mouse has made me think twice about switching. Yet now its days at the top are over because the Logitech MX Master 3 is here and it’s even better.

This isn’t a radical overhaul and, at first, it’s hard to spot the difference. The MX Master 3 might be a millimetre shorter and narrower than its predecessor (and nearly 2mm taller) but it feels nigh-identical in the hand and the 4g weight difference isn’t too significant, either. A USB Type-C connector sits underneath the top buttons for charging, where the 2S used micro USB but again this doesn’t make a huge amount of difference, day to day.

Partly, this is a case of “if it ain’t broke”. The MX Master 3 was already shaped so that every curve worked to support the hand, supporting the most common palm grip without alienating those who prefer a fingertip or claw grip – who mostly go for gaming mice, in any case. While there’s an argument that a more vertical design puts less strain on the hand, the wrist and the forearms, the MX Master design is about as ergonomic as standard desktop mouse designs get.

There is a slight difference in terms of the finish, with the MX Master 3 using similar plastics in similar places. However, where a rubberised skin sits above the plastic body on the thumb rest of the Master 2S, the Master takes the same rubberised surface right to the edge of the mouse. And where the old model has a kind of polygon mesh effect going on, the Master 3 goes with lines across its contours. Again, any effect on comfort and control is fairly minimal; both feel incredibly solid and well-made. 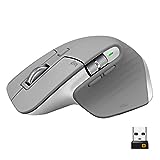 The MX Master 3 uses roughly the same button layout as the MX Master 2. You get your standard two buttons underneath the index and middle fingers, with a chunky, milled steel scroll wheel in the centre. The button underneath the wheel switches between smooth scrolling and click scrolling modes – click the button located just behind the wheel to toggle between the two. There’s also an additional wheel on the left-hand side above the thumb-rest, plus an extra button concealed in the thumb-rest itself, which you’ll find if you just click down on it.

The most crucial difference is the shifting of two back/forwards buttons from where they used to sit, rather awkwardly, behind the thumbwheel to a spot below it. This is a good thing, as the contortions required to use the old buttons meant I barely ever used them and the shift to two, more traditional buttons makes them easier to find.

You can customise what all the wheels and buttons do in Logitech’s well-designed Options app, where ready-made profiles are provided for many of the big-name productivity and creative applications, including Microsoft Office, Chrome, Edge, Photoshop, Premiere Pro and more. This means you can have different operations mapped to different buttons on an application-by-application basis. And, where the presets don’t match your preference – for example, I prefer to use the thumbwheel as a zoom control rather than a horizontal scroll – it’s easy enough to change them. Spend a little time tweaking and you have a mouse that adapts to speed things up as you switch between tasks and applications.

The other crucial aspect of the MX Master 3’s feature set is its wireless connectivity. As with Logitech’s other mid-range and high-end mice, you have a choice of a 2.4GHz wireless connection through a bundled dongle or standard Bluetooth, and the mouse can pair with up to three laptops, tablets or PCs. However, Logitech goes beyond simple switching between devices – at the press of a button underneath the mouse – with a feature it calls Flow.

Flow allows you to switch between devices automatically by moving the pointer beyond the edge or corner of the screen. Have, say, two laptops side by side, and when you move the pointer off the left-hand-side on the right-hand laptop, it’ll appear on the screen to the left. Vice-versa applies when you move it off the right edge.

It just works and it’s easy to set up. As long as both PCs are on the same network, the Options app will do the hard work for you. What’s more, you can cut and paste not just text but even images from one laptop to the other. Throw a Logitech Bluetooth keyboard into the mix, and you can have it set up so it follows the mouse from one computer to the other. It’s effectively a software keyboard/mouse solution and very handy if you need to work between, say, a Windows desktop and a Surface tablet, or in any situation where you’re using multiple PCs.

All of the above helps make the MX Master 3 a superior high-end mouse but what really pushes it above the rest is its precision. Up to a point, I take claims of 4000dpi sensitivity levels with a pinch of salt; the mouse might be capable of it, but I’m not sure I can say the same for my fingers. Yet when trying to make pixel-precise selections on a 1080p or 4K screen – for instance when cropping a photo to specific dimensions – the MX Master 3 makes it relatively easy in comparison to other mice.

It’s no better than the MX Master 2S in this regard and it arguably helps that it feels so familiar, but when accuracy matters you don’t need to overthink every movement. The pointer or the cursor does exactly what it’s supposed to do rather than getting in the way.

It also does so across nearly any surface. I tried it on wooden worktops, plastic-coated tablecloths, old magazines and even a glass chopping board. Although the rougher or more textured surfaces weren’t exactly ideal to mouse on, none of them seemed to faze the MX Master 3.

And, while the scroll-wheel is often overlooked, the MX Master 3 shows where a good mouse makes the difference. In its click-less free mode you can scroll at ludicrous speeds but still stop it exactly where you need it, which is ideal when you spend half your day scrolling through long web pages or documents in the pursuit of research.

It’s not a huge achievement to tweak one of the best mice in production and make it a little better, but that doesn’t make the Logitech MX Master 3 any less exceptional. It’s as smooth and luxurious as the Microsoft Surface Precision but stronger when it comes to features.

Its ergonomics are ever-so-slightly superior to its predecessor’s and it’s every bit as accurate and comfortable. And while £100 is a lot to pay for any mouse, if you want the ultimate pointing device for productivity and demanding creative work, you will not find anything better.

This article contain Amazon UK affiliate links, which means we may earn a small commission (at no extra cost to you) if a reader clicks through and makes a purchase. The prices may vary after publication, please follow links for current prices and offers.

Carl comes from a creative tech background in retail and telecoms, his flair and attention to detail is very important to the success of this website. Carl is a freelance journalist who shares his knowledge and experience as well as reviewing tech products for us.

Make sure you enter all the required information, indicated by an asterisk (*). HTML code is not allowed.

Apple AirPods Pro Review: Ideal When On the Move

Great guide on Fitbit Apps and how to use them

Starting and Running a Business All-in-One For Dummies